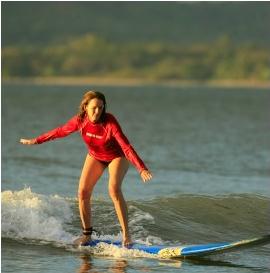 Surf’s up – get playful.

March’s debut heralds spring’s arrival. Throw off those February doldrums and get playful. You.

What’s that? You spend all your time helping others so you can’t find time to play? Care giving at both ends of the generational spectrum? Tired of everything, starting with yourself?

Stop boring me to tears. Get up from your desk, get outside, and get playful. That’s an order.

Here’s a babe who knows how to do just that. Does this chick look like she’s sitting around compiling a grocery list for dinner? Don’t think so. The Moon Girl is in the moment, following her bliss. What about you?

By the way, Moon Girl is not twenty-five years old or under. She just looks like she is because she feels like she is. Not all the time, but at the moment these images capture.

Can’t afford to drop everything and take a trip to a surfing destination, never mind that you don’t know how to surf? That’s not an excuse.

Get out there and get some sun on your face. Today. That’s right, go out and greet Mr. Golden Sun and feel the vitamin D pour into your soul, filling every cell of your body with vitality. It’s easy, really.

The sun glows golden in the late afternoon right before it begins to descend. It’s a bit like the way the French refer to a woman of a certain age as “une femme mûre” or “a ripe woman.” The French highly admire attractive women in their golden late afternoon chapter. Many Americans do too. Connoissieurs of finely seasoned beauty can be found in many unexpected places. Find out more in Chapter Ten of Paris Adieu.

Did you see that man on the corner giving you the eye as you sauntered past? What? You didn’t notice? Next time you take a walk, saunter. Find your inner French femme. When you start to do that, the connoissieurs of this world will take note. Promise. You may even want to meet some of them. You won’t, if you’re in a rush.

Now back to your March marching orders. Go outside this afternoon and let the sun’s golden rays sink into your psyche. Later in the afternoon, coincident with that mid-afternoon energy slump, the sun’s rays are less bad for your skin than  between the hours of 10 am and 3 pm. Have you got a packed day today? Don’t have a single second to yourself?

Fuggedaboutit. Make it happen, darling. Take ten minutes and instead of hitting the vending machine, go downstairs, out the door, and say hello to the world that is your stage. Connect with nature. Open your ears to hear what that bird is singing about. He’s heralding spring’s arrival. A few weeks early, granted, but he’s out there noticing all the signs, just as you should be.

Thumbs up to life, friends. If yours isn’t as glamorous as Moon Girl’s, remember — these shots capture just one golden afternoon. The rest of the time she’s running around like the rest of us, busy, attending to the needs of others, spilling her vitality right and left. But inside, she has bottomless energy to give. Because she knows she’s Moon Girl. Be a Moon Girl too. Follow your bliss. You owe it to yourself. Start today.